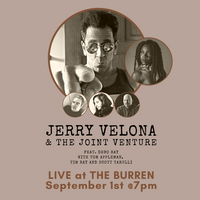 We'll be playing two sets of original music by JV as well as super cool covers in rock, funk, blues, jazz & soul. Featuring the scintillating vocals of Ms. Debo Ray and a killer band comprised of Tom Appleman on bass, Tim Ray on keyboards and Scott Tarulli on guitar. We will be performing Debo's recently released jam, Filly as well as a track from the upcoming Pack of Viceroys release. You might hear us play some jazz followed by a metal tune. And oh yeah, some Zeppelin! The Burren Backroom is one of greater Boston's coolest venues. Great food and drink and you can sit and listen or dance around a bit. Help us close the end of unofficial summer. It's an all-ages show, so bring the family.