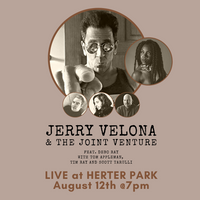 We'll be playing an hour and a half set of original music by JV as well as super cool covers in rock, funk, blues and soul. Featuring the scintillating vocals of Ms. Debo Ray and a killer band comprised of Tom Appleman on bass, Tim Ray on keyboards and Scott Tarulli on guitar. We will be performing Debo's recently released jam, Filly as well as a track from the upcoming Pack of Viceroys release. And oh yeah, some Zeppelin! Herter Park is right next to the Charles River and is, literally, one of Boston's hidden gem venues. Great sight lines and sound and - ta-dah - it's free!